On a few hours spent in the Marshaw - Tower Lodge - Trough Bridge area earlier in the week, it was rewarding to find 7 Pied Flycatcher.

Priority of the visit was to get up to date on the pair found tree nesting on 23 May. Today they were both watched regularly returning to the nest feeding young, quite the opposite to the female seen leaving the nest box at Tower Lodge, with at least one young poking it's head out of the box, but despite a couple of prolonged watches, I saw no adult birds returning over a total of 30 minutes. 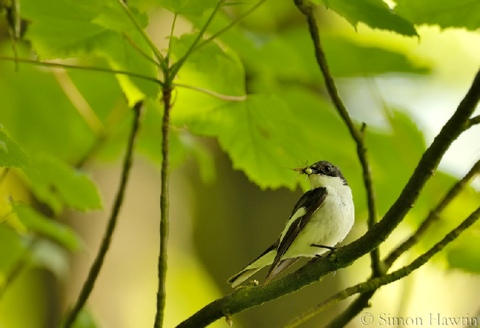 A pair were seen at another nest box in the compound, but better still was yet to come when I got to the top of the hill beyond Trough Bridge, I saw a bird in flight, and picking it up in a tree it was a female Pied Flycatcher offering the possibility of a second pair tree nesting in the area, but despite a lengthy wait I saw nothing other than the female flighting here and there, but no evidence of a male or potential nest hole. During this watch, a Redpoll seen feeding a wing flapping young bird, and a lone Siskin in an adjacent tree. 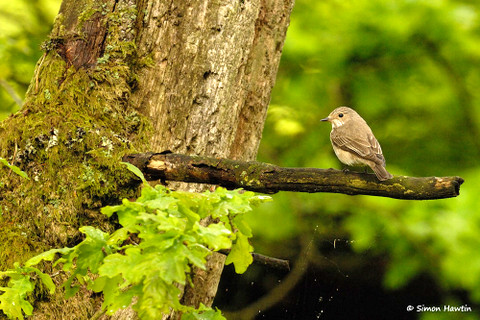 Of note with the 24 species seen, juveniles accompanied the 9 Grey Wagtail and similar Pied Wagtail seen on the Marshaw Wyre, 2 Common Sandpiper with one bird calling probably with young nearby, 6 Willow Warbler, 3 Song Thrush, 2 Nuthatch, 2 Mistle Thrush, and 2 Robin. House Martin and a Swallow nesting at Tower Lodge, and a Green-veined White was the only butterfly seen in 5 hours.

Thanks to Simon Hawtin for the excellent images for this post.
Posted by Pete Woodruff at 11:41

Brilliant the Spotted Flycatcher, thanks for that.