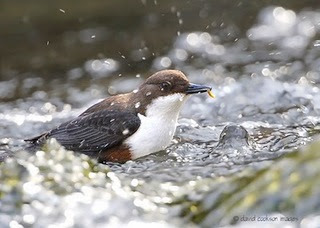 Dipper. David Cookson.
With JB/BT today we first visited Conder Green - well where else would you go to first - and found 2 Spotted Redshank seen yesterday still here again, also Greenshank here still, a Little Ringed Plover flew out of the River Conder just downstream from the A588 road bridge and on to Conder Pool.
We had already decided earlier we should now head off into the Bowland area which turned out to be a 'Bowland Revisited' day for me, but not a problem as it had some better results for us than I had yesterday and today's efforts didn't include a fraction of yesterday's legwork. On the way we stopped off at Street Bridge and noted a Grey Wagtail on the river here. From the Hawthornthwaite track I again checked out the small colony but saw just 3 Sand Martins with no activity around the nest holes, I think it's quite conclusive no breeding here this year, a pair of Red Grouse were interesting in that when they took to flight they took with them a single fledged young bird, a Kestrel was noted hunting here.
Approaching Wellbrook Farm it was BT's turn to be the 'hawkeye birder' as he spotted what turned out to be a pair of Common Sandpiper with a single young bird, an excellent record, there are a 'few' House Martins around this farmhouse and I intend counting them on my next visit to this area. At Marshaw three young Oystercatchers seen today with at least six pairs in this area, a juvenile Dipper was another excellent record with a male Redstart also seen.
It was in the Tower Lodge area the day became much more interesting when 5 Spotted Flycatchers were found which included two pairs both seen attending young at the nest hole, another male Redstart seen, a Treecreeper, and a Nuthatch as far as I can recall is the very first of the species I have seen in this area, a Grey Wagtail was the only one see here today. Calling in at Christ Church just outside Abbeystead only one House Martin nest active here this year.
An interesting conversation with a member of the estate staff revealed no let up in the 'Red Grouse Problem' with 84 birds found dead in a 'relatively small area' along with 'some' Curlews falling victim to the same 'tic' problem, but as the conversation progressed a change in sheep dipping strategy may hopefully bring about some change it seems.
Thanks for the Dipper photograph David, it is much appreciated.
Posted by Pete Woodruff at 20:32