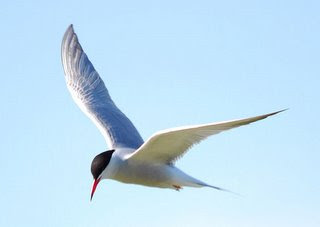 Common Tern. Gary Jones.
Well certainly not an image of a Bridled Tern but one of the Common Tern....thanks for this Gary. In fact you can see an image of the Bridled Tern on the Birguides website HERE and click on 'species search', as far as I'm aware this is the only one in existence of the bird which caused quite a stir on Monday 21 June when it was reported to be at East Chevington in Northhumberland, but the excitement was short lived and the bird has not been seen since.
The Bridled Tern occurs throughout the tropics, the nearest breeding population being in the Caribbean, the bird is about the size of the Arctic Tern and is confusable with the much rarer Sooty Tern but isn't as big and robust as the Sooty Tern but with which it shares its occurrence in the tropics.
The first record of Bridled Tern in Britain was that of a corpse found inland from Dungeness, Kent in November 1931. A bird found in September 1875 eventually failed to be recorded as the first because of some serious inconsistencies. The first live bird recorded in Britain wasn't until August 1979, it was an immature bird observed feeding outside the entrance to Stromness Harbour, Orkney, the bird was seen the next day by the same observer and was the first Scottish record.
There's an interesting story attached to a Sooty Tern found in Northhamptonshire in May 1980, the bird was picked up exhausted and take into care, quite amazingly the creature lived for another five months before dying amidst a sea of mindless bureaucracy regarding its return to a more hospitable climate....how very sad.