Although it was never the plan I didn't get birding today and to make matters much worse won't do until later this week maybe on Friday. As far as today is concerned it left me staring at this monitor for long periods....not good for the mind, body, or soul I assure you, and not recommended. So that leaves me with the problem of finding some material to keep this blog up, running, and alive. Well today's solution was easy because all I had to do was to collect three images and 'Bobs your uncle' as they say. 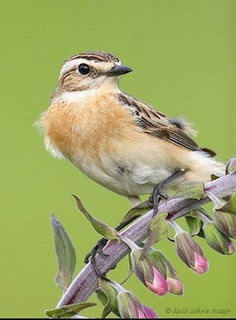 So the credits for all three photographs go to David Cookson, and the first is of one of my most favourite small birds the Whinchat, a species becoming more and more difficult to find because of the falling number seen in the UK of this delightful chat. Having said that, as with the Spotted Flycatcher - which has the same unfortunate status - I have found an encouraging number again this year with 17 seen at five locations three of which were birds on passage in the spring and the best of which were 10 found in the Cross of Greet/White Greet/Bloe Greet area on territory 21 May. In our own recording area the Whinchat can claim to be no more than an uncommon and declining migrant breeder, we can only hope this doesn't fall any further down the ladder of declines. 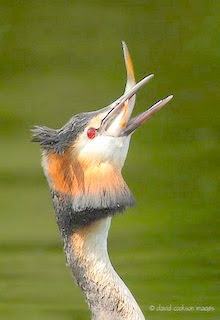 Davids next image is of the Great-crested Grebe and could well carry the caption 'Going Down' as the bird appears to make short work of devouring the fish it just caught. The GCG is no more than a scarce breeder in our area with something like 10-15 pairs. When I watch birds like this which catch fish as a food source I'm often astounded at the sizes they can dispose of, the best example of this would have to be the Cormorant but I did watch a beautiful drake Smew a few years ago on Pine Lake eventually swallow a fish the size of which was unbelievable for such a small duck.
And finally.... 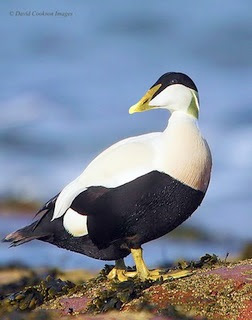 The drake Eider - as with the other two images - brilliantly captured by David. The Eider can be seen offshore in our area for much - if not all - of the year and I have personally counted at least 150 off the promenade at Morecambe on 3 March this year, and 57 off Plover Scar at Cockersands on 12 April, I also recently observed a female with five chicks off Bodie Hill on Glasson Marsh on 13 June.
Many thanks for these excellent photographs David they are much appreciated.
Posted by Pete Woodruff at 16:26

That Whinchat really is a cracker pete. Whets my appetite for for Autumn passage , when one might just turn up here. :-)

Yes, these people produce some stunning images and as someone who did have a serious interest in photography in a previous life I never tire of seeing such work. I'm also lucky to have permission from several of them to use their material on Birds2blog.

Thanks for your continued support Warren.