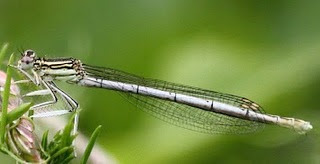 White-legged Damselfly. Warren Baker.
Regular visitors to Birds2blog won't be at all surprised to find the photograph above is totally unrelated to today's subject, but a good picture always gets the post off to a good start. The White-legged Damselfly is uncommon but can be locally abundant on rivers and canals in the south and a few sites in Wales....Thanks for the photograph Warren.
I've found up to twenty Spotted Flycatchers this year at five locations, an excellent result for a bird in serious decline and one I'm particularly fond of and always a pleasure to find and see. The SF joins a number of migrants to this country which are the subject of mounting concern through their - often referred to as dramatic - decrease in populations, three other examples being the Turtle Dove, Cuckoo, and Nightingale.
Nightingale numbers have seen a fall of more than 90% in the past forty years and is the biggest fall since records began of any bird still breeding in the UK to the exclusion of the Tree Sparrow whose numbers have been decimated by intense agricultural practices. So if you were born in 1970, for every ten Nightingales singing in Britain then, now that you're forty there's just one today and that makes for pretty unpleasant reading. We're talking here about one of the worlds most popular songbirds, famous for it's powerful singing in the dark and celebrated by many poet's down the years.
According to research one major cause of the Nightingales decline in Britain is brought about by the population explosion of deer, the browsing of which is destroying woodland undergrowth which the bird nests in. But there are also problems in the wintering grounds as other British species which winter in the same areas of West Africa are also in trouble, including the Willow Warbler, Garden Warbler, and Cuckoo, the former of which I myself have experienced smaller numbers in the areas visited this summer.
All very sad that we are entering an age where many people may not ever have the chance to hear the once familiar sound of the delightful song of this equally delightful songbird. The so called Red List is updated every five years and the Nightingale will appear on that update.
Posted by Pete Woodruff at 21:35

There used to be two pairs of Nightingale breeding on my patch pete, the last was in 2006, single songsters have been hear in 2007 and again this year - but they didn't habg around. A real loss to our countryside.

Yes a real loss Warren and sadly not a bird on it's own in the loss.